MLLA roundup and the winners

Let me start by thanking Susan for her patience with me in posting the roundup almost a week later than promised. I would also like to thank all the wonderful bloggers who participated with so much enthusiasm and some with as much as five entrees. Clearly, legumes rule your kitchens.

As I mentioned in my last post, I had no idea how popular her event is and the deluge of entrees was overwhelming. But fret not, I have it under control and here’s the round up, excluding a few entrees who did not follow one of the rules, mainly that of linking their entrees to both Susan’s and my event announcement pages. Apart from that, I think I have everyone covered. If I still missed someone, do let me know and I will do the needful.

The roundup is posted in the order in which the entrees were received by me. The winners were generated by a random generator and Ambrosia wins any cookbook or food-related book from Amazon U.S. valued at not more than 15 USD for the book itself. This prize is offered by Susan at her expense and she will also absorb worldwide shipping charges. So Richa Priyanka, go ahead and chose that cookbook you always wanted.

The second winner is Shanavi of Kitchen Secrets and will receive a case of six bags of the winner's choice of Hurst Bean products, suitable for every diet, sponsored by Hurst Beans. Susan will get in touch with you shortly. I have omitted the photos because that is the way I have done most of my roundups. My apologies if you  were expecting about 70 photos in this post.

Now to the roundup:

5. Makhmali Choliya Kabab by of Ribbons and Pasta

7. Arhar Dal with Kathal by Saltiepie

8. Unfried Green Tomatoes by Sra of When My Soup Came Alive

9. Chane ka Nimona by My Life and Spice

13. Ven Pongal by Cooking with Siri

16. Humus with Sun Dried Tomatoes by Food and Spice

24. Kollu Dosai or Horsegram Crepes by PJ of Seduce Your Tastebuds

39. Bhare Baghare Tamatar or Stuffed tomatoes by Flavours and Tastes

61. Jamaican Rice and Beans with Mangoes by Saffronstreaks

62. Humus and Falafel Wraps by The V Kitchen

63. Aamer Dal by The V Kitchen

66. Mung Beans Dumplings by Queen of My Kitchen

This months's MLLA-35 is being hosted at Kannada Cuisine, so head on over there to enter your delicious legume entrees.
Posted by Desisoccermom at 6:48 PM

The 3s equation, a masoor dal and a MLLA deadline

Today is the last day to submit your entrees for this month’s MLLA-34 hosted on this blog. I knew MLLA was a popular event but I had no idea how much. My inbox has been deluged with entrees, ok, not deluged, but I have been getting a couple of entrees every day since I announced the event. It is astounding. If you still haven’t posted your lentil creation, now is the time. The clock is ticking. 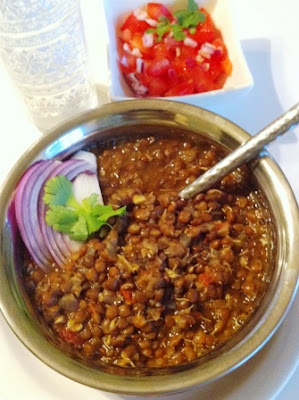 I have already managed to post one entry and in it I promised Susan I will post another one. This one is a simple masoor dal which accidently got sprouted because I got busy dealing with those pesky things in life that come in threes. I have heard all my life that all things come in threes and I always hoped they are all good things. No such luck. Here’s how it all went down:

My laptop is an extension of my blogger and student self. I write my blog posts on it, edit photos in picassa, write essays, do homework and take my online class on it. For all the important tasks it helps me accomplish, I do not take particularly good care of my laptop. It sits on my lap when I am lounging on the couch, watching TV and doing my home work. It sometimes slides to the carpet if I turn around to grab an occasional snack from the side table or to plug the power cord in. So far, it has come about relatively unscathed.

The universe or the laptop must have lost patience with my clumsiness. One day last week, when it slid to the ground for the 100th time, it fell on the side where the power cord was plugged in. I did not realize till an hour late that the battery wasn’t charging because the fall had broken the thin little plug. The very next day, I walked into an electronics store to buy a new power cord. The bill at the register: $80! Not a small price to pay for a moment of clumsiness. I was dismayed to say the least. 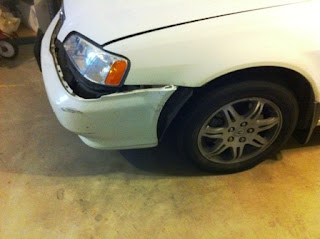 The bumper, propped up.﻿
On my way back, I had to pick the kid up from preschool and guess what? I got into a fender bender at a yield sign. The car (read tank) I crashed into was a Chevy Tahoe, which did not seem to have a single scratch. My sedan on the other hand had a loose bumper and a smashed headlight. This was my first accident in ten years since I started driving. I wasn’t hurt, nor was the driver of the Chevy. I was surprised at how calm I was, pulling into the nearby parking lot and making phone calls to a friend to pick the kid up from preschool. I called the preschool to let them know my friend was going to pick the kid up.

Only then did I turn my attention to the Chevy driver who was busy taking pictures of both the cars with his cell phone camera. We exchanged insurance information; he helped me prop up the now hanging bumper and drove away. I on the other hand sat for ten minutes in the car, shaking and trying to comprehend the last half an hour. The whole experience was so surreal, I found myself shaking and on the verge of tears.

It took me about ten minutes to gather myself before driving back home, which was five minutes from the scene of the accident. As if the unnecessary expense of the power adaptor and now the possible hassle of dealing with the insurance adjusters and repair shop wasn’t enough, two days later, our lawn fence fell down due to high winds we get this time around in Tx. It was a big 15 foot section which fell and normally I am all for breaking down fences. But this time around, there was the question of our HOA who are very strict about matters of outdoor appearance. 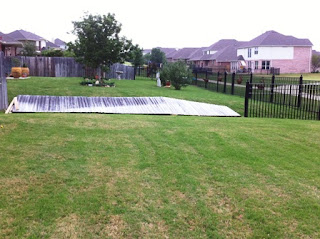 The wind blown fence.
The neighbors we share the fence with have three dogs who were suddenly confined indoors and it was hard to see them looking out longingly at the sunny lawn. Phone calls to fence companies followed for a week, getting quotes and conferring with the neighbors. Those were the three things, none of them good, that disrupted our normally calm lives in a single week. 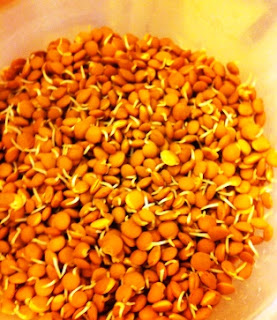 Sprouted masoor
It is a good thing I have a good network of friends on twitter and facebook. I got plenty of support and encouragement from Soma, Manisha, Susan and some of the readers who follow me on twitter and facebook. I had also put the word out that I was looking for a spare hp adapter, and a few days later, my best friend Erin called back to say she had not one but two spares from two separate kaput laptops. I met her for lunch and good conversation and came home $80 richer for it.

Meanwhile, the car is in the repair shop and the fence is still down. I do have about a dozen estimates for fence repair and we should have a new fence in a couple of weeks.

While the stress of threes is ebbing away, I have to contend with the fact that my semester finals are drawing to a close. That means, finishing off three essays for the English class, a power point presentation and a final exam for the Computer Application class and a final third exam for the history class. I am done with the PowerPoint presentation and two essays but I still have a final exam and one more essay to write by Sat. The history exam is next Monday. Looks like I am stuck with the 3s equation for a while.

Yesterday, after reading up three history chapters, I turned my attention to the sprouting masoor that had been pushed to the back of the fridge. He came home just as I was finished prepping for it. He had bought some fresh trout from the store. Two whistles in the cooker for the masoor while the trout sat in a rub of salt, black pepper and red chili powder. I rolled a few chapattis, grilled the trout on my cast iron skillet and dinner was ready. 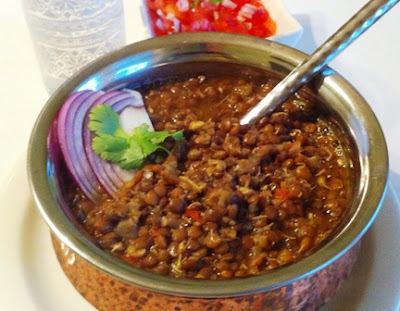 Method:
Heat 1/2 tablespoon oil in a pressure cooker and add the cumin seeds. Turn the heat to medium low and add turmeric and asafetida. As they turn fragrant in a few second, add the chopped onions and minced garlic. Stir around till the onions are translucent and the garlic tender.
Add garam masala and red chili powder. Cook for a minute before adding the tomatoes. Cover and let the tomatoes soften before adding the sprouted masoor.
Add salt to taste, some vegetable stock or water to cover. Bring to a boil on high heat, put the lid on. Let the lentils cook on medium heat for two whistles. Turn off the heat, let the pressure subside, transfer to a platter and serve with rotis and a nice piece of grilled fish of your choice. 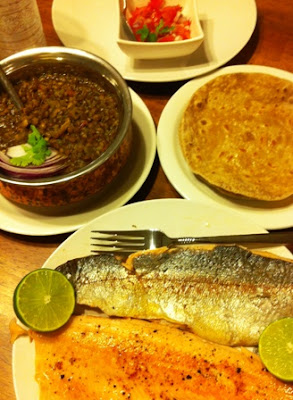 The final dinner.
Note: Masoor can be cooked in a pan instead of a cooker, since it doesn’t take long to cook. Cook till it is tender but still has a bite to it.
You don’t have to sprout it, but it is recommended that you soak it for a couple of hours.
Add more garam masala if you prefer it spicy. I love the taste of masoor itself, so I try not to overwhelm the dal with too much spice. 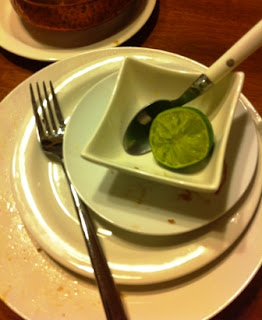 A couple of parting notes:

While I juggle the final week of Spring semester, I decided to make a DSM page for those readers who would like to connect with me on fb but prefer not to invade my private space. If you belong to that category, there is a link on the top left corner that should take you to the DSM page on fb. If you would rather follow me on twitter, search for Desisoccermom there.


I will leave you with this link and announcement to Sra’s blog where she announced the revival of Of Chalks & Chopsticks, an event started by Aqua. If you have a food related tale to spin, this is the event for you.
Posted by Desisoccermom at 3:15 PM