It is the middle of August and I have yet to post something for my own event, B2B – Spice Powders. So here is my first entry to my own event, a simple, basic spice used in almost every Indian kitchen.

Ever since I can remember, one day of the year in our house, my mother devotes an entire afternoon to making dhana-jeera powder and garam masala. Breakfast is a hurried affair of make-your-own-omelet, as is lunch (khichdi, a spiced porridge of rice and lentils). Once the mundane morning chores are over, the measuring, roasting and grinding of spices starts.

Aromas of gently roasting cumin, cinnamon sticks, bay leaves, peppercorns, cardamom and cloves gradually rise from the cast iron karahi, envelop the tiny kitchen, waft through the door to fill our entire house and gradually make their way to the front door to descend the stairs and into the street. The neighborhood auntyji drops by, taking in the whole spices and trying to gauge the recipe. She is too proud to ask for a recipe, the acclaimed cook that she is. My mother is too modest and unpretentious to turn her down but clever enough not to volunteer unless asked. So, the recipe remains a family secret or rather my mom’s secret.

Her garam masala looks or tastes nothing like the store bought one that I am forced to buy here once I run out of the stash she packs for me. Hers is dark brown and very fragrant, sharp and sweet smelling at the same time. Just a little bit is enough to perk up a bland vegetable like chana lauki. I do not have her recipe because when I used to help her with it, I never bothered to pay attention or jot down notes. My only contribution in the whole process was to make sure the glass jars were washed and dried thoroughly. I was also given the task of grinding the spices and pouring them into the jars. 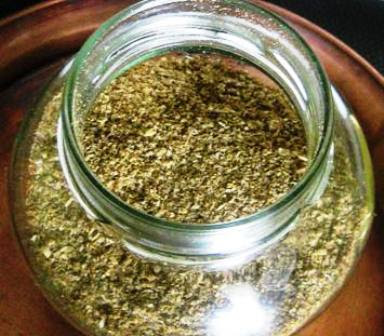 This November, it will be three years since I visited my mother. I talk to her every week but I have never asked her for the garam masala recipe. Not because I am proud like the auntyji next door. It is because I know my mother does not know the exact measurements. She will tell me to take a handful of peppercorns and a small bowl of cloves and double the amount of cumin to shajeera. How she manages to end up with the same spice mix every year remains a mystery.  I have promised myself that the next time I visit, I will be prepared, with measuring cups, a camera and writing equipment.

For some reason, I never asked her the ratio of dhana-jeera powder either. I just used equal amounts of dhana to jeera and called it a day. I should have known better or at the very least called up my mother. Instead, I called on my friends on fb. I was informed, unequivocally by all, that 2:1 is the traditional ratio for dhana-jeera, since jeera is denser than dhana. My mother confirmed and gave it her seal of approval.

This then is the recipe or proportion for dhana-jeera powder. 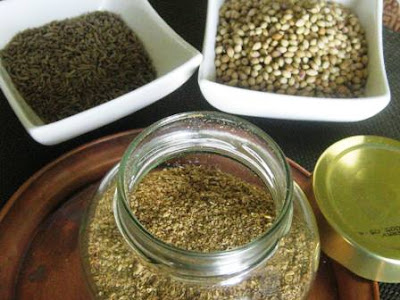 Method:
Heat a wide, thick skillet on medium heat. Lower the heat to medium low and roast jeera till it changes color slightly and is fragrant. Keep stirring frequently so as not to burn or unevenly roast the cumin. Transfer to a plate to cool.

At this point, I roast 1/2 cup more of cumin seeds and grind them separately. I use this powder to sprinkle on yogurt, lassi, buttermilk and just about anything you can sprinkle some roasted cumin powder on.

In the same pan, roast the dhana powder in batches, using the same method as above. Cool and mix with the roasted cumin. Working in batches or according to the capacity of your grinder, grind the two to coarse to fine texture.

I use a coffee grinder, which does not have a large capacity. That is one of the main reasons why I make dhana-jeera powder just enough to last me a couple of months. Once I get my mother’s recipe for garam masala, I may have to crash at a friend’s place to grind my spices. She has one of those heavy duty Sumeet mixers which grind spices and dosa, idli batters without breaking a sweat. 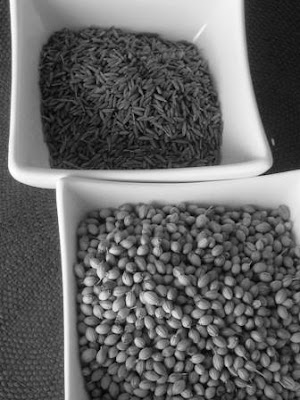 The b&w shot of the dhana-jeera is for Susan's B&W Wednesdays, a weekly event I try to participate in when I can remember.
Important notes: If you live in a tiny apartment or a carpeted house, it is advised that the spices be roasted in weather conducive to open doors and windows.

Close the doors of all the bedrooms leading from the kitchen. Ignoring this critical advice may lead to your residence smelling, at first of the aromatic spices but eventually clinging to the carpet, drapes and upholstery fabric for a long, long time.

It should by no means deter you from trying out this simplest of basic Indian spice powder and adding it to just about every savory dish you can think of. Whatever you do, please do not buy packaged dhan-jeera powders, no matter how convenient they seem. It is no match for roast-and-grind your own spice, no matter what the quantity. Go on, try it. I dare you.