A guessing game for the tea party

My heartfelt thanks to all you lovely people who took the time to pause and read this post and then give you precious comments. I have had fun making this for Anita’s Tea Party. It was my first time attending and it was a blast. However, amidst all the fun was the backdrop of plagiarism and blatant lifting of copy and pictures, not just by fellow bloggers but by long standing institutions (?) like TOI. (Read her powerful post here.)

It is easy to stamp your feet and proclaim that a recipe does not have a copyright, especially if it is specific to a particular region or cuisine. However, there is copyright infringement when ingredients and sometimes the method of preparation is lifted blatantly and passed off as their own. I have never had the misfortune of my copy being lifted, and frankly I don’t know whether to breathe a sigh of relief or to feel slighted at the insignificance of my blog.

But ask a blogger whose content was stolen and she will tell you it is like slaving over a ten-course meal the whole day and then have the mother-in-law take the credit for your hard work. I sure would not want to be in either of their shoes, which is why I try my best to give credit where it is due. And if you, my dear readers, have ever felt tempted to pass off on giving credit, be aware. It is a small knit community and sooner or later you will be caught and exposed for it. So, go ahead and copy past that link you have been debating about. Link Karma is a powerful thing and it will come back to bite you or reward you, depending on how you treat it.
Now, back to the tea party...


“Hey, I’m leaving work now. Will be home in another 45 minutes,” he said over the phone. “Got another surprise for me?”

“Well, it wouldn’t be a surprise if I told you, would it?” she asked with a smile in her voice. “Drive safe,” she said and hung up the phone.

A few weeks ago, when she started their little game of “guess what’s for tea?” she didn’t think it would come back to haunt her so soon. It had started out of a desire to connect with a man she barely knew. She would call him when he was driving home in his car and they would play the guessing game till he reached home.

The first time they played it, she had found a neat trick, while surfing the net, to make batata vadas without getting her hands dirty.  He wasn’t much of a tea person and he didn’t care much for the fried stuff either. She, from the land of kachori and poha, missed the fare and the company. She would sit in the cold apartment and think back on the days when relatives and friends mingled and chatted over cups of hot tea in her parent’s two bed room home.

He, from the same land but without her attachments, was happy with some dal-chawal-sabzi-roti. But he had gradually got used to her waiting with the tea. “Now,” she thought happily, “he craves that cup of chai as much as I do.” 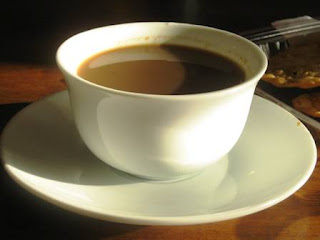 The batata vadas were a gamble, but she couldn’t have chosen a more opportune time to make them. It had been raining the whole day and by evening the clouds had ceased their pitter-patter. A cool breeze had picked up and the air smelled of wet earth. He had come home to find the apartment smelling of fried vadas and ginger infused chai. He had guessed right on the third try that she was making something deep fried.

“Is it yellow in color?”

“Is it batata vada?”

It was almost too easy that first time. After that, she had to get creative each time, if not with the snack then with the hint. Like the time she told him it was something baked.

He had guessed everything from cakes to muffins to scones. “Well,” she had said when he looked at the chutney sandwich, “I meant the bread was baked. I didn’t say I baked it!” He had started laughing at her guile and she was happy and emboldened.

Today, she was in trouble. He was expecting a Q&A and she had zilch. She opened the fridge and spotted the cilantro-mint chutney from two days ago. “Nah, we had sandwiches yesterday.” There was half an onion wrapped in saran wrap. She was still getting used to the supersized onions of this land. She missed the small, red bulbs of her homeland that tasted sweet and sharp and pungent at the same time.

She banged the door of the fridge a bit harder than she wanted to and started rooting around the various cabinets. Her eyes lighted up as she saw the red and gold packet sitting forlorn in an upper shelf. “How did I miss this?” she said out loud.

She was transported back to her mother’s kitchen, trying to decipher the chatter from the hallway beyond and keeping an eye on the pot of boiling tea. Her mom was calling out to her to bring out the big kadhai where she and her sisters were sitting around gossiping. The smell of onions and cilantro and something else she couldn’t remember. The laughter and the talk as someone tossed and mixed everything in the big kadhai. Her mom scooping out the spicy goodness in stainless steel bowls. An aunt straining the tea into the mismatched tea cups. 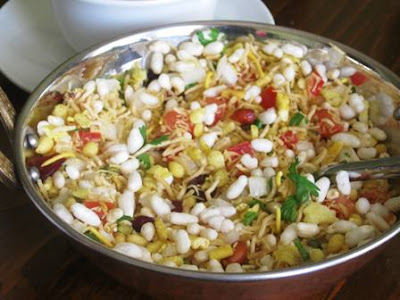 She jumped when she heard the phone ringing. She had been clutching the red and gold packet for ten minutes. “Hello,” she said into the phone.

“It’s me. I am fifteen minutes away. Sorry couldn’t call you before for the Q&A,” he said on the other end.

“That’s ok, just come on home. I haven’t decided what I am making. We can just have toast and biscuits,” even as she said the words she realized she knew what she was going to make for this tea party.

She put a small kadai on the cook top and started dry roasting the puffed rice. The onion was unwrapped and chopped. A few sprigs of cilantro floated in a glass of water as she put the tea to boil in a saucepan. She reached for her Aaji’s dabbas and quickly added the sugar and tea leaves to the water. 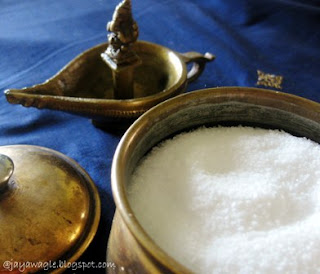 She found a small tomato that she deseeded and chopped. Half a cucumber was stripped of its dark green coating, deseeded and cut into fine cubes. She almost reached for a sharp green chili but decided against it.

She took the now crispy puffed rice off the flames and mixed it in with the Haldiram’s khatta mitha, some bhujia and a handful of neylon sev. She looked up at the watch before reaching for the mint chutney in the fridge. “Five more minutes,” she thought as she started mixing the onions, tomatoes and cucumbers in the kadhai.

She looked over to see the water boiling, changing from a light tan to a dark brown color. She quickly added a splash of 1% milk and grated some ginger with the tiny grater her mother-in-law had given her.

The cilantro was demanding attention. She lifted the sprigs from their water bath and patted them in between two paper towels. As she chopped the cilantro over the mix, she smelled the heady smell of onions, cilantro and the salty-sugary-spicy aroma of the mixture.

“Almost like that day,” she wondered aloud and then remembered that there was something still missing. “It is not the mint chutney,” she thought. That was her addition; just like the dried cranberries she had found hiding behind the packet of raisins. What was it her mom had added that day? It was there, she knew, at the tip of her tongue. She could almost taste it, smell it, but it remained elusive.

“Ah well,” she shrugged as she took the tea off the heat. She heard the front door open as she started to strain the tea into the two mugs. And then it hit her, chat masala. How could she not remember chat masala for chat?! 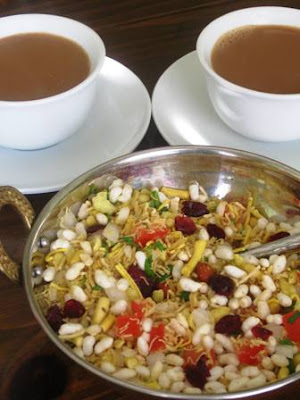 The two sat down on the balcony with the tea and the big bowl of bhel. He popped a spoonful in his mouth and chewed it slowly, letting the flavors mingle and sing on his tongue. As he reached for some more, he said, “You know, this is what you should take to Anita’s tea party. It is perfect.”
Posted by Desisoccermom at 12:56 AM