In the past, I have promised to post event roundup on time and in most cases I have managed to do it too. So forgive me if I am a bit tardy in posting the round-up for MLLA-51. It has been a stressful month to say the least. First the kid was down with strep throat and missed four days of school. The next week I was down after catching his germs (isn’t that what moms are for?)


The week after that, the husband was in a T-bone accident. For the uninitiated, a T-bone accident is one where one car hits the other at a right angle, just like a T. So, if you are going straight on a road, minding your own business, following the speed limit and keeping a safe distance between the cars in front of you, you can still get hit from the side. It is especially brutal because you are caught off guard. If you have never been in a T-bone accident, I hope you never have to find out what it is. Fortunately, he was not hurt in any way. The impact was behind the passenger side door, right above the rear wheel. 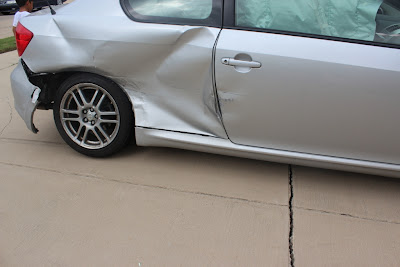 Those white curtain are the air bags that deployed on the passenger side
﻿
As if one accident was not enough to last a lifetime, exactly eight days later, he got into another one. Yeah! What are the chances of getting hit from behind while at a red light, a week after getting T-boned? I am guessing very slim. But that is what happened to him.


At the end of it it was a seven car pile-up in two lanes all because the lady who caused it was in a hurry to be somewhere. She hit a car which hit the car in front of her which hit the truck behind the rental car he was driving. Meanwhile, the lady who hit the first car tried to veer from the accident and ended up hitting another car in the other lane which bumped into the car in front of it.  If it sounds confusing, just imagine four cars bumping into each other in one lane and two cars crashing into each other in the next lane because of a lady driving to somewhere in a hurry.


So, I am hoping you will forgive me for posting the roundup so late. There weren’t a lot of entrees this time and Susan attributed it to the long run of the event. She is thinking of retiring the event but I hope she doesn’t. I like legumes and it is good way to learn about all the diverse varieties and methods of cooking them.


For some reason, I am not able to upload the photos you sent me. I will try again in the evening adn see if they will upload. Meanwhile, let us get on with the roundup:


The first one, as always, is the prolific blogger PJ with her sprouted moong and tomato gravy.


In Toronto, Canada, Janet made a No-Bake Peanut Butter Mousse with a Chocolate Magic Shell for an outdoor picnic with her boyfriend.


Lubna made efficient use of a fresh batch of kunduri to make dal and a stir fry. Check out her favorite way of eating this delicious vegetable.


Another entry from Toronto, Canada comes from whom else but Toriew Toronto? She made use of green banana peels and made a yummy chutney.


Anshu made some finger-licking papri chaat from scratch for a chaat party organized at her home.


In Italy, Cindy made some delectable eggplant rolls with a hearty humus like stuffing made with cannellini beans.


Denise loves to cook with lentils and legumes. It is evident in the three entrees she sent this month:
Microwaved Crunchy Moong Dal
Low fat black beanbrownies


All the way from Lagos, Nigeria, Lata posted about her childhood memory of roasted,salted peanuts.


Lail revived a forgotten past with these red lentils cooked with green mangoes. How can anything this colorful not taste good?


Heather at GirlieChef has been cooking Madhur Jaffery’s recipes for a while and this time she made Khatte Chole from the grand dame of Indian cooking’s repertoire.


Inspired by a recipe of her friend’s mom, Bala cooked a stew of butter beans and eggs, an unusual combination packed with protein.


A cook at heart, Manasi made a savory version of puran polis by stuffing parathas withspicy lentils.

Susan, the hostess and creater of MLLA sent in these delicious pancakes made with chickpea flour and fenugreek leaves. That is a pancake worthy of breakfast, lunch or dinner.


And here is my contribution to this affair, a pumpkin sabzi made with a generous sprinkling of peanuts and sesame seeds.
I think I have covered everyone who sent in their entrees. If I missed you by some chance, please do let me know and I will add you accordingly.
Now for the winner of the Hurst Bean Box and the Everything Juicing Book. It is Manasi of A Cook at Heart. Congratulations lady. Susan will contact you shortly.


Here is the second part of Go Pumpkin Go. For the first part, check out the pumpkinsabzi post.


Sher Khan was startled. Usually, the humans either pleaded with him or were so scared of him they started running for their lives. But this old woman was different. He decided to be polite and replied back, “Good morning to you too old woman. I am hungry. Are you ready to be my breakfast today?”

Chatura hadn’t expected Sher Khan to talk back to her but never the one to let an opportunity go by she seized it by the lion’s tail. “What, you want to eat me for breakfast Sher Khan? I am just a bag of skin and bones. I won’t whet the appetite of a big, strong lion like you. You will be hungry again before the day is over.”


“Well, what do you suggest I do? I will eat you for now and then I will hunt some more.”


“B…bu…but, what if I tell you to let me go? You see, I am on my way to my daughter’s house. Once there, I will rest and eat to my heart’s content.  I will fatten up in a few months and then when I am on my way back you can eat me,” Chatura suggested hopefully.


Now it was Sher Khan’s turn to think. It was true that the old woman did not have much meat on her. She was right. He would be hungry by noon if he ate her now. Plus, he was beginning to like this plucky hag. It was a pity he would have to eat her eventually but he decided he could wait. Besides, he had just spotted a plump deer a few meters away.


“All right old woman. I will let you go, for now. But I will definitely be waiting for you. You better come back all fattened up,” he growled and walked away to stalk the deer.


Chatura heaved a sigh of relief, turned on her heels and was on her way as quickly as she could. Half a day later, she reached Samajh’s house. Her daughter was surprised but delighted to see her mother. She quickly fetched some water for her to drink and started preparing for tea. Over tea and hot samosas, Chatura recounted her adventure with Sher Khan while her grandkids listened wide-eyed, amazed at their grandmother’s courage.


“Ma that is quite an adventure you had. Why don’t you rest for a while? You must be tired from the long journey,” Samajh said kindly.


Chatura nodded and followed her daughter to a small but clean room just off the verandah. While she rested Samjh started preparations for dinner. She wanted to prepare a feast for her mother and everything had to be perfect. She went into the small backyard and picked up some tender okra for a stir fry. The carrots looked like they were ready to be pulled. She tugged gently at the leaves of one and pulled it out of the soft soil. A long, orange carrot coated with specks of dirt dangled in her hands. They were just right for a gajar halwa. She pulled a few more bunches and put them in her basket. As she turned around, her eyes caught a speck of orange amongst the numerous vines that grew profusely in the corner of the garden. She went to investigate and found a small pumpkin nestled in the leaves. She was about to pick it up for another stir fry when the spark of an idea made her stop.


Samajh decided to leave the pumpkin for now and went back in the tiny kitchen. The lentils were already simmering away on the wood stove. She started chopping the okra and onions and tossed them in a wok to cook. As she grated the freshly washed carrots for the halwa a plan was formulating in Samajh’s mind. “I will have to run it by mother though. She will know if it is any good or not.”


That night, Samajh, her family and Chatura sat down to a feast of okra stir-fry, delicately cooked lentils, fragrant rice pilaf, cucumber onion salad and rich carrot halwa. Once the dinner was over, Samajh quickly cleaned up and put her kids to bed. Then she sat on the front porch with her mother and husband, Karma, and told them of her plan.


“So Ma, while I was picking up vegetables in the backyard, I had an idea to save you from Sher Khan. But I need to run it by you,” she said.


“What is it beti?” Chatura asked. Ever since her escape from Sher Khan, she had been thinking of the inevitable journey back home. She had lived a full life and was not afraid to die. But she did not want to die at the fangs of a wild beast. She preferred to pass away in her neat little hut, on her own charpoy, surrounded by her family and friends.


If her clever daughter had an idea, it was worth exploring.


Posted by Desisoccermom at 1:46 PM