Rounding up the reposts

After the high of announcing an event you go through the low of waiting the first few days, checking your email for the 10th time, wondering if there will be any entrees at all. Half way through the deadline the entrees start trickling in and you get excited. More so because they are from bloggers you look up to and read regularly.
It is even more exciting to discover some wonderful, new bloggers that slipped under your radar but you found them through your event. There are some who in their haste to send in an entry forget to read the rules but are gracious enough to redo their posts.
Here is a big thank you from the heart to all of you who took the time to go over your old posts and reposted them with anecdotes, nutritional information and amazing photos. 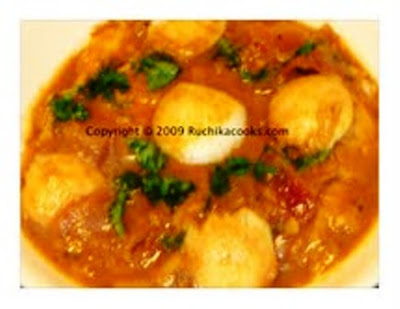 What are the chances that the very first entry you receive is also one of your favorite meals? Ruchika's very first post, which she kept updating to add tips and tricks to make the softest, fluffiest idlis, did not receive a single comment. Just goes to show, good things don't always get their due desserts err... sambhar. 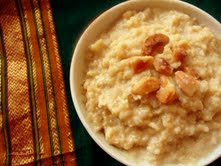 The sweet sakkarai  pongal was sent with a smacking new photo from Dil Se by Divya. Made by following her mother's original recipe, it was her maiden post two years ago.

A witty writer who knows her words and her food, Sra reposted her nutty beginnings, almost four years later,  and it is as "Nutty" as the rest of her blog, When My Soup Came Alive. 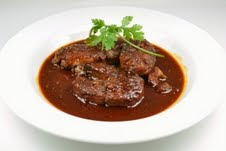 When Sig sent me a repost of her Caramelized Catfish, I did a double take, not only because the recipe was totally new to me, the photo looks like a tenderly cooked piece of meat instead of seafood. And that is the magic of this vivacious girl's foodie blog, Live to eat. 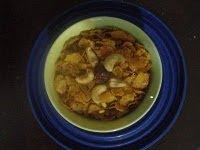 Nivedita's Cornflakes Chiwda was reposted a couple of days after I gave away my unused but perfectly good box of cornflakes to the neighbor. She came up with the recipe while living in UAE and it even got picked up to be featured in Radio 4 FM! Naturally, it was her very first post when she started her blog, Nivedita's Kitchen, in March of last year. 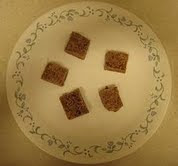 Devi reposted her Coca Burfi which incidentally was not only her first attempt at making sweets but also her first post on her two year old Devi's Blog. 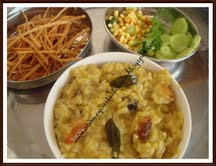 An expat living in China, PJ's blog has a unique touch of the orient. But when it came to blogging, one of her first few posts was that of a traditional family recipe, Bisi Bele Huli Anna, passed down from her great grandma. PJ tried her mom's version of the recipe just for the repost event and in the process wrote the confessions of a sore thumb. 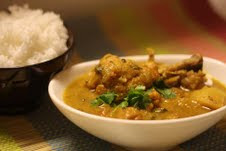 What started almost four years ago as a simple chicken curry has evolved into an almost foolproof one for Indhu's gorgeous blog, Daily Musings. Besides, you have to love a delicious chicken curry that cooks in one pot (pressure cooker) and is open to change based on the mood or the weather. 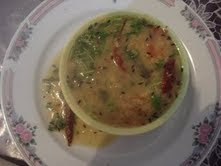 Nivedita's second entry did not make it to the radio but she assures us that the flavor of burnt jeera (cumin seeds) in this dal is tooo good to resist. And I believe her even though she points out her original post did not get any response.

Shama reposted her Arisi Paruppu Sadam or dal rice with red carrot fry, with a slight variation on the original recipe and better photos of the delectable meal. Her blog is worthy of its name Easy2Cook Recipes. 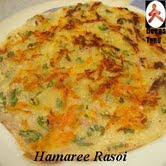 Deepa started her blog Hamaree Rasoi (Our Kitchen) not six months ago and she started the New Year with a resolve to not only post more recipes from her kitchen but also learn from her fellow bloggers. She reposted this easy-to-appease-your-hunger recipe for semolina cheela which she modified by adding veggies to. However, her original recipe sounds as good as the new one. 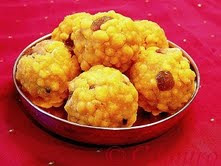 She is the essential garnish for almost every savory Indian fare and possibly for all the Indie bloggers out there. Her very first recipe, Boondi Ladoo, on her beautiful blog, Cilantro, is one of mine and possibly every kid and adult's favorite sweet to eat for festive occasions and during weddings. 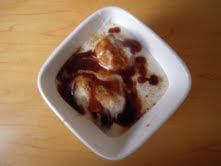 Jyoti of two month old Veggie Hut  dressed up her original post and reposted the Gujjia Vada, a gourmet take on the regular dahi vada. Laced with cashews and raisins, no wonder this delectable recipe is an all time favorite of her spouse.

It started as a carrot kheer recipe for a friend in Nithus's Kitchen but somewhere along the way she decided to turn the boring beets to a delicious and healthy beetroot kheer. And if you thought the buck with beets stops at kheer, check out her original post. She was planning to make halwa with it! 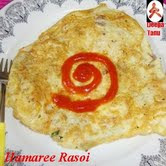 Deepa's second entry, bread keema in egg, was inspired at a train station when the vendor passed it hastily through the compartment window. This delicious mash of eggs and bread was posted originally five months ago. 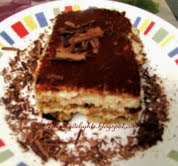 From Preethi's Dreamy Delights come two delightful reposts. One for eggless tiramisu and one for almond cranberry biscotti.  The eggless tiramisu was made using eggless sponge cake in the absence of eggless lady fingers and was her very first post. The repost also included the recipe for the sponge cake.

The biscotti, on the other hand, was a lesson in writing down the correct oven temperature. After a burnt first batch, the second one turned out prefect and was the fourth post on her blog. 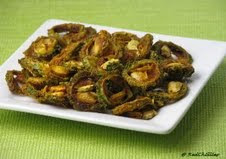 She is everyones favorite blogger not only because of her delicious recipes and even more appetizing photos but because almost all of us rely on her blog aggregator to get visitors to our blogs. Only in Supriya's world can the bitter gourd turn out crunchy and delicious with a photo you want to take a bite out of. But if you want to know how she arrived at the recipe, check out her hilarious initial post conversation with her better half. 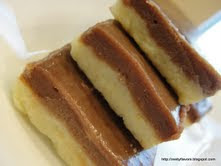 As Vaishali Bhutani got more involved with her blog, Adding Zest to Your Life, she graduated from pictures taken with her cell phone to a proper camera. The above photo was taken when she made her easy to make microwave double layered chocolate burfi for some friends who were coming over for dinner. 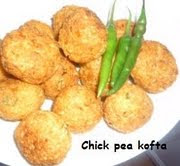 When your kids come back from school and ask if you got any comments on the blog, you are in the presence of a dedicated blogger mom who names her blog The Joy Of Cooking. Her Indianized take on the  falafel is versatile for kids as well as to be frozen and later heated up and served as  quick appetizer for guests. 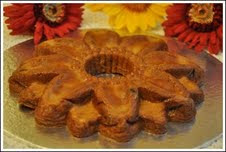 When Aqua serves you bread pudding with love you don't say no, especially when she turns the humble pudding into something out of a gourmet restaurant. Check out her very first foray into the dessert world and the world of blogging. Aqua, before you correct me I did read your post word to word and know you were an expert at the pudding at the tender age of eight, which was long before you started blogging.

She thought she was tardy for my party but little did this fellow Texan know there were others to come after her. If you haven't met Ann's Split Pear Personality you are missing out on some of the most adventurous, varied recipes a girl can blog about and have a sense of humor about it. Her curried couscous has gone through a lot of changes since the first time she made it and she presents it proudly with a new photo and an extra garnish "that grew out of the side of the dish like a tumor and took up most of the money shot."

With a name like Foodielicious you can expect finger licking recipes not unlike this Dhabba Style Palak Paneer. At the age of 20 Pari cooked this smoky dish for a party of 45 and not only got praise for her cooking skills but her cleanliness as well. No wonder this recipe is close to her heart and one of the first posts on her blog. 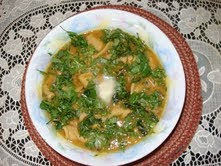 The World according to Rujuta has a Varan Phal recipe that brought back nostalgia of a comfort food that had almost slipped out of my culinary consciousness. Rujuta decided to repost this one with links to other versions of this recipe also known as dal dokhali and a salute to her father and his roots in the orange city of India, Nagpur. 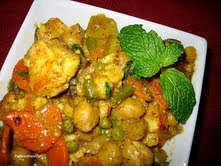 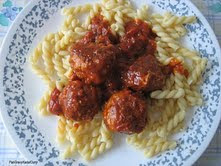 True to her name, Cool Lassie decided her initial two posts were perfect the way they were. But honoring the rules of the event she decided to repost the two recipes with new photos which more than do justice to her Navrattan Korma and Turkey Meatballs with raisins.
We are what we eat and no one practices that philosophy more passionately than Vaishali of Holy Cow. If you think vegan and vegetarian is the same thing, Vaishali will not only set the record right for you, she will give you one delicious vegan recipe after another before you can say, "Holy Cow!" (my weak attempt at pun). Head on over to her blog for a lesson in compassionate cooking and healthy choices for the mind and the body. 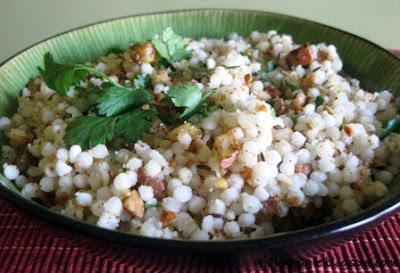 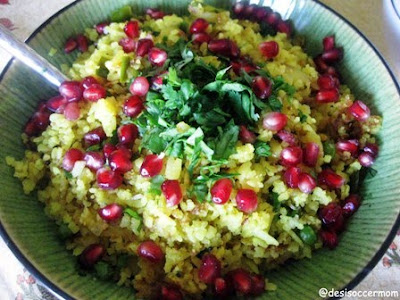 Adhering to the Indian tradition of the host eating after the guests have had their fill, here's my humble contribution to my own event, Sabudana Khichdi 101 and Indori Kanda Poha.
Since this is my first event I decided to do the roundup in the order of the entry received. I have tried to be as precise as possible making sure all the entrees are included and hall the links work. If you spot any glitches, you know where to find me.
And she did. Just as I was starting to get a big head from all the compliments Champa brought me down to earth. I looked and found her email hiding in the spam folder along with another entry from Nithu Bala. So with my apologies to the two lovely ladies here goes their entrees at the tail end of the roundup.
. 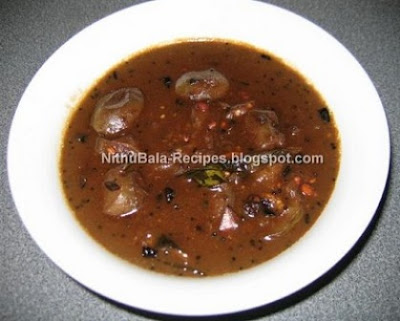 Nithu Bala's second entry was Milagu Kuzhambu which is a favorite of her dad's when he is down with a cold. After learning its medicinal properties, Nithu too started loving this previously hated nutritious soup. 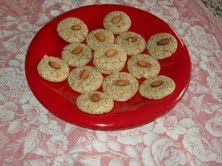 Champa's vegan almond cookies evolved from a recipe a friend's mom had given and a recipe scribbleed down so long time ago she didn't remember where. But the recipe was a keeper and she reposted it in  Stories from an Indian kitchen by prettying up the cookies with an almond placed in the center.
Posted by Desisoccermom at 10:04 AM