Officially a desisoccermom again and some accidental chole aloo

You see, when I started this blog my son was three and had just started playing soccer. He was playing in one of those little Y leagues for boys and girls and it was a very tame affair given the kids’ ages. He enjoyed the experience of playing with other kids, kicking the ball around and generally running around. I would drive him to practice on weekdays and games on weekends in my car, not a van but a car, but it still gave me the rights to be called a desisoccermom. Born and brought up in India gave me the rights to ‘desi’ as in from des or country of birth. That, in short, is the blog naming story. 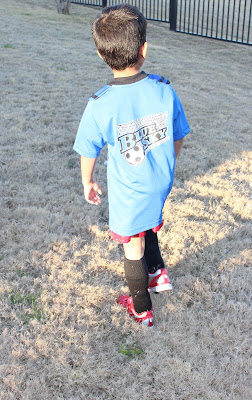 All ready for the game﻿
Six months later, the kid had graduated to playing serious soccer which meant the practice games were more disciplined and the matches with other teams were much intense. The kids from the other teams were bigger, aggressive and driven compared to my kid who was in it just for the fun and none of the jostling and pushing. The first day of the match was on a cold winter morning. My son took one look at the opposing team players kicking ball and pushing players out of the way to score a goal and he clung to me with a pincer grip. “I don’t want to go play,” he wailed. “I am cold. I want to go home.”

The husband couldn’t stand his three and a half year old cowering in my arms. He started pacing up and down the field to work off his agitation. The coach sensed the kid’s fear and gently coaxed him to go on the field. He held his hand and ran on the field with him. It was totally against regulation but they allowed him anyways. A few minutes late the kid was back in my arms and the husband back to his pacing. The routine continued for two more weeks before I had had enough. We withdrew our boy from the team (over the phone) and I announced that we were not going back to the soccer fields till both the boys could learn to handle themselves on the field.

Four years later, the kid said he wanted to play soccer again and promised he would behave. The husband promised to be a better sport on the field. So, I enrolled the kid in the same soccer team his best friend also plays in. The games are played indoors so hopefully the weather won’t be a mood dampener this time. We had our first practice session last week on a cold, windy evening but both the boys were a good sport. The younger one kicked the ball around, went around the cones and ran with his teammates. The older one coached him a bit and cheered him on. I walked the perimeter of the soccer field trying to keep warm. 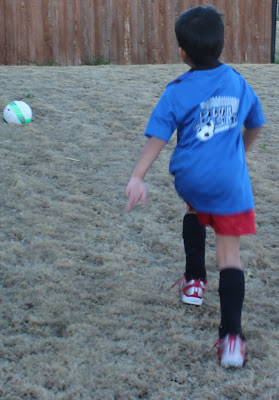 Warm up before the match

Two days later, the match went off smoothly as well. The kid’s team, Hawks, won 7 to 3. The kids were happy as were the parents. The kid didn’t too badly on the field even though he incurred two penalty points for his team when he touched the ball in the circle (yeah, I am talking soccer jargon already). The older boy was happy his son didn’t chicken out like four years ago. I was happy I didn’t have to handle two cranky, agitated boys. We came home exhausted and hungry.

This is where the accidental chole aloo come in. I looked in the fridge and found some cooked garbanzo beans from two days ago with a small jar of left over onion-ginger-garlic paste. Now the ginger-garlic paste was no ordinary paste. It had khus-khus (poppy seeds) and cashews in it as well as a small tomato. This was a paste leftover from a special curry I tried to make the day after V-day. It was supposed to be kaju-paneer masala, a rich, decadent dish but it ended up not so good because I over roasted the masala too much, added too much garam masala and used whole milk instead of cream to thicken the gravy. It was a masala paste made in haste, using a combination of ingredients grounded together instead of roasted and ground separately. It was not the best thing I ever made but he ate it without any fuss. I am married to a saint, I tell you.

Anyways, I had some of that raw masala paste leftover from last week’s experiment gone awry and maybe half a cup of garbanzo beans. I added some oil to the karahi and added the raw paste. The paste was sautéed on a medium-low flame for about ten minutes. I don’t care much for ground onion pastes. It tends to get bitter if you roast it too much and has the potential to burn if you take your eyes off even for a minute. It also tends to taste raw if not roasted enough. It is a delicate balance and I don’t do well with delicate. This paste was easier to work with because of the added fat from the ground khus-khus and cashews.


Once the paste was roasted to ‘just the right amount’ and the oil started releasing from the sides, I added some tomato paste and roasted some more. Then, I added the chickpeas, some peeled and chopped potatoes and a generous amount of liquid. The whole mix simmered on the stove for a few minutes till I got tired of the simmer. So, I dumped the whole mix in the 3 ltr Prestige pressure cooker and turned it off after two whistles. The resulting chole were good, just like they would be made in any Maharashtrian home, with a simple rassa (gravy) only this time the rassa had poppy seeds and cashews as an added bonus.
Here is the accidental recipe for chole aloo:


The day before you make this, soak 1 cup dry garbanzo beans (kabuli channa) in plenty of water. By plenty I mean at least 3-4 cups.
Next day, wash the garbanzo in plenty of water or transfer to a colander and let water run over the soaked beans for a few minutes. Transfer to a pressure cooker, cover the beans with water and add two teaspoons of salt and set the lid. Let the pressure build up and then lower the heat to medium. Wait for at least 3 whistles before turning the heat off.

While the beans are cooking in the pressure cooker, and much later when the pressure is subsiding, prepare the masala by grinding the following:
1 cup roughly chopped onions
3-4 cloves of garlic
1 inch piece of ginger
2 small tomatoes or add 1 tbsp of tomato paste later
1 tbsp ea of khus-khus (poppy seeds) and cashew pieces soaked in water

Now, heat a tbsp. of oil in a thick bottom karahi or wide pan of your choice. Turn the heat to med-low and add the masala paste. At this point the water in the onions and tomatoes tends to splatter the oil and the low temperature helps reduce the splatter. Of course, if you have minions to clean up after you, by all means splatter away on med-high.


Roast the masala till the oil starts to separate. Keep a close eye on the roasting masala while you peel and chop two potatoes.


At this point add 1/2 tsp turmeric powder, 1 tsp garam masala, 1 tsp chole masala (recipe to come later) and 1/2 red chili powder.
Let the spices roast in the masala for a few minutes before adding the chopped potatoes. Add some salt to taste and 1/2 cup of water. Cover and let the potatoes cook.


Meanwhile, check if the pressure cooker has cooled down. Take the lid off carefully making sure your face is away from all the trapped steam under that lid. Check if the garbanzos are tender and then carefully tip them or use a ladle to add them to the simmering potato masala. Add some more water and let the chole-aloo simmer till the potatoes are tender and the gravy thickens.
I, of little patience, dumped the whole mix back into the pressure cooker and cooked it under pressure for two whistles. In ten minutes I had the softest garbanzo and the tenderest potatoes simmering in the delicious gravy.

We had the chole aloo that day with store bought wheat tortillas and some leftover rice. More importantly, I cooked my chole aloo in an Indian pressure cooker and it didn’t blow up in my face!

We had the chole aloo that day with store bought wheat tortillas and some leftover rice. More importantly, I cooked my chole aloo in an Indian pressure cooker and it didn’t blow up in my face!
Posted by Desisoccermom at 11:38 PM