Last week was one of the erratic weather weeks we Texans have become used to. For those of us who grew up in a clearly demarcated climate season, it can take some getting used to pleasant 70 degree weather followed by a cold front and two days later foggy and humid weather. There is no rainy season in Tx either. The rains grace us intermittently; soak the land for a few hours or a few days and then vanish over the horizon to return at another time of its choosing. Last week, the rains started just as I picked up the kid from school and was heading back. The light drizzle quickly turned to a torrential downpour by the time I parked the car into the garage. Five minutes later, the rain was falling in steady streaks.


I was about to close the door when the kid asked, “Mamma, can I go play in the rain, pleeease?”
He was waiting patiently, beseeching me with his big, brown eyes. “Ok,” I said, “but wear your raincoat and your rain boots.” I needed to unload some groceries anyways.


“Ok, ok, ok,” he yelled as he ran off to find his rain gear. The raincoat is from last year and getting a bit small for him. His sweater sleeves poked out under the yellow raincoat’s sleeves. He jammed his feet into the black rain boots and went in search of his plastic boats.
I opened the garage door to let him splash and play on the driveway while I watched over him from the dry safety of the garage. He found a small puddle in the driveway and immediately jumped in it. “This is no fun,” he said. The water wasn’t too deep and the splash barely made it to his ankles. So off he went in search of deeper puddles. He found one in the neighbor’s yard. Their driveway slopes steeper than ours and one corner forms a tiny pool, big enough to make a splash up to his knees. 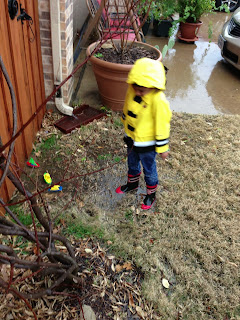 Not much of a puddle﻿
After testing the puddle for its staying power he brought in his plastic boats and started floating them. “Can you bring my dump truck?” he asked squatting at the shore of the puddle.
“Sure,” I said. I handed him the dump truck which he immediately proceeded to fill with the water gushing down the drain. Then, he dumped all the water over the boats.


“What are you doing?” I asked.
“I am flooding the boats with water to see if they will sink.”


“I am not bringing you a bucket and I want you to come in now,” I said to him. I was cold and wet and ready to go in the warm house.
“Five more minutes, pleeeease,” he said as the fists started to come together in the familiar, begging/ prayerful gesture. 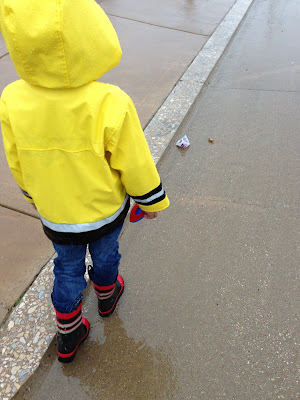 Following the floating boat
I decided to let him play for a bit more. Watching him splash and play in the water, my thoughts wandered to my own childhood. Memories of splashing and playing in the rain with my sister and my cousins came flooding in. I don’t remember who first started the boat competition but it became standard practice for us to make paper boats and race them in the temporary gutter that formed at the side of the road every time it rained. 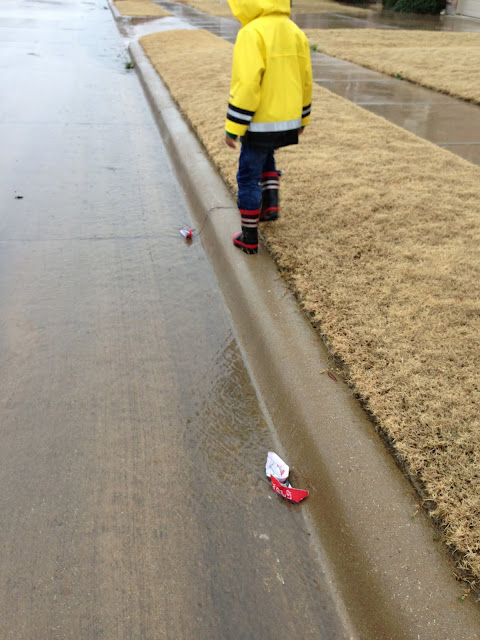 His boat is ahead of mine
Suddenly, I had an idea. I grabbed some papers from the junk mail and started tearing squares, folding them twice over and then folding them in triangles to make some paper boats.
“Come on kid, let’s have a boat race,” I called out to him.

He was skeptical at first but once the boats started floating he was hooked. I watched my son watching intently over his boat, coaxing it to float ahead of mine and sighed contently. We stayed out, racing our paper boats, till our boats were wet and limp and couldn’t float anymore. It was a day well spent even if it was cold and wet and windy. What are your memories of rainy season as a child?

Posted by Desisoccermom at 2:08 PM