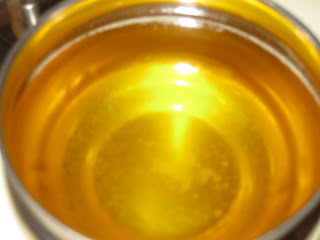 I have a confession. I never liked making ghee back home in India. It was an elaborate process that took 2 hours of a Sunday morning. The preparation started two weeks before that. My mom would carefully skim the layer of cream off the hot milk and put it in a designated pot in the fridge. When the pot was almost full she would add a tablespoon of yogurt to the cream pile. The yogurt helped separate the milk solids and water.
Once the pot was full, it was my job to run it through the food processer or the blender till the cream was formed into delicious lumps of butter floating in the whey. The whey then had to be separated from the butter and the butter washed three times in water. It was a sticky, messy affair.
Once the butter was washed and clean, my mom would put it on a low flame on the gas to melt and turn into delicious golden ghee. The whole house would smell of the melting butter and our neighbors would know we were making ghee.
Here in the States, making ghee is as easy as put the unsalted butter in the pot, turn on the heat and 25 minutes later you got delicious, golden ghee. 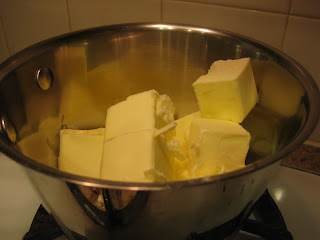 Cut the butter into small squares. Place a heavy bottomed pan on low heat and add the butter to it.
The butter will start frothing and bubbling in the next 5-10 minutes. In the next 10 minutes it will start turning golden brown and clear.
My mom’s simple test to know for sure if the ghee was done was to sprinkle a few drops of water on it. If the ghee was done, it would spatter and sizzle. If not, keep it on for a few more mins.
Once the ghee is done turn off the heat and take the pot off the gas. The ghee at this point is so delicate that even the residual heat on the burners can burn it.
Once it is cooled, strain and transfer to a heat proof pot. Ghee will keep at room temperature for a month and for a very long time in the refrigerator.
Posted by Desisoccermom at 11:29 PM